As much as we would like to have closed the door on tragedy and travesty with the end of last year, the tumult of 2020 has carried over into 2021. The good news is that the financial markets seem to have shrugged off the more dire interpretations of recent events and appear to be discounting a brighter future for stocks and perhaps the economy as well.

We’ve mentioned before that, even if one could accurately foresee future events, predicting the market’s reaction to those events is more difficult still. If your crystal ball had accurately shown you that 2020 would include a massive pandemic, a widespread economic shutdown, a Democrat winning the White House (until recently considered a “market negative”), a sitting President refusing to accept the results, the Democrats winning control of the Senate (also, still more recently considered a “market negative”), a deadly mob storming the Capital of the United States, a second impeachment of the sitting President, a deadly third wave of the pandemic, and the potential for further civil unrest in Washington D.C., as well as in 50 state capitals in response to the inauguration of the new administration, what would your guess have been regarding the reaction in the stock market? Record highs? Probably not. Yet, that’s what we got.

The S&P 500 and the Dow Jones Industrial Indexes fell by almost 35% in the “Coronavirus Crash,” and then worked their way all the way back to record highs while the pandemic raged and the economy struggled to rebound. The recent roll out of the vaccines has given hope that we will see economic growth continuing and possibly accelerating in coming quarters. Some are expecting an economic boom once the vaccines allow businesses to resume normal activity. Others point to the indicators of record high valuations plus extremes in speculation and warn of the dangers of a substantial sell-off in stocks. We can’t know with certainty what will happen, but we can understand better how we got here.

Of all the factors affecting the prices of financial assets, there are two that have overwhelmed the rest. The first would be the ZIRP (Zero Interest Rate Policy) of the Federal Reserve Board, and the second would be the massive influx of money pumped into the economy by the Federal Reserve and the US Treasury in response to the pandemic. Below is a chart of the change in money supply (M1) year-over-year for the past several decades. What it shows could be described as another occasion to use the word “unprecedented.” Money supply growth has hovered around 5% to 10% with occasional spikes to 20%. We are now approaching a 70% increase in one year. With massive amounts of funds pouring into the economy, the prices of stocks and other financial assets have ridden a tidal wave of liquidity like we’ve never seen. With record low interest rates on fixed income investments, “TINA” has become a very popular investment philosophy. (There Is No Alternative – to stocks, that is.) 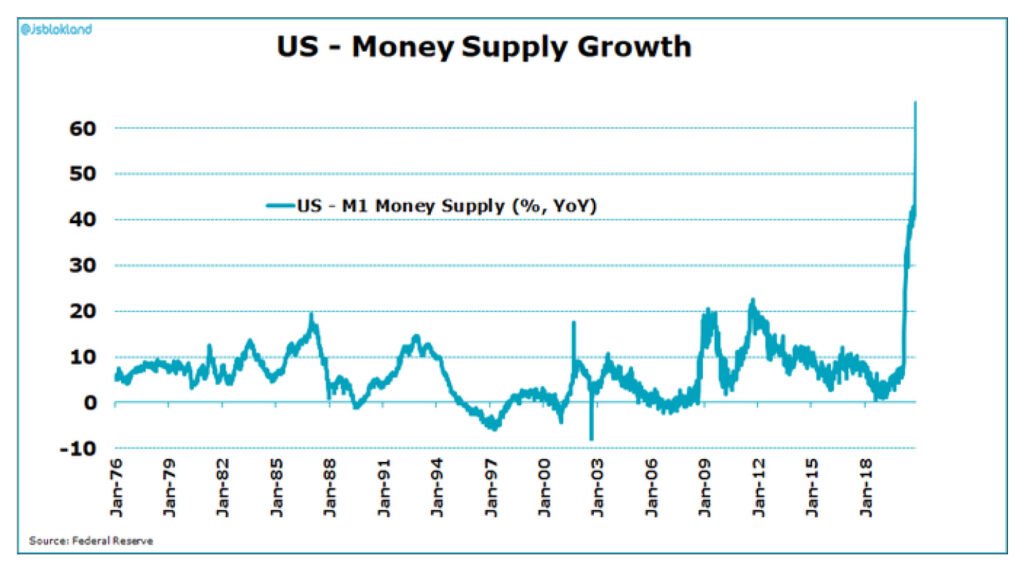 With the influx of liquidity, the first stocks to take off were the “work at home” companies, the medical supply and vaccine stocks, internet retailers, and other pandemic beneficiaries. Many had valuations that were already high and were taken still higher. However, more recently there has been a shift to more “value” oriented stocks as their valuations are still cheap, their prospects in a re-opened economy are improving, and many pay a generous dividend. This is the area where we have been concentrating our recent investments as the risk/reward trade-off appears to be better.

We have not bought many bonds recently because of the historically low interest rates they offer and because investors can suffer losses if interest rates rise. The risk/reward trade-off there does not look particularly favorable. However, we have found value in other areas. We have taken positions in ETFs (exchange-traded funds) of “value” and dividend-paying stocks in order to increase diversification in a sector we like. We have also taken positions in bank and financial company stocks because of their cheap valuation and the prospect of their reaping huge profits from using their massively increased deposits to generate better returns (for the banks, that is) as interest rates rise and the yield curve steepens (long rates rise faster than short term rates). We also added to positions in Bristol Myers based on its cheap valuation, its attractive dividend, and the prospects for some of their new drugs and treatments.

There are many signs that the market is historically pricey and possibly vulnerable to a nasty sell-off. But with another round of stimulus from the new administration added to the unprecedented money supply growth like we have seen, there is no telling how far the rising tide will take us. We will continue to look for value while focusing on our top priority, which is preserving your assets. Buying stocks with good dividends that pay us while we wait is a good place to start.

Please let us know if you would like to adjust the allocation of assets in your portfolio for any reason. It is always better to have those conversations before the next storm strikes!

Enclosed you will find your year-end reports and statements. Feel free to call anytime to discuss your portfolio in general or in detail. We thank you for the chance to work with you on your investments, and we hope for a brighter and better 2021 for us all!